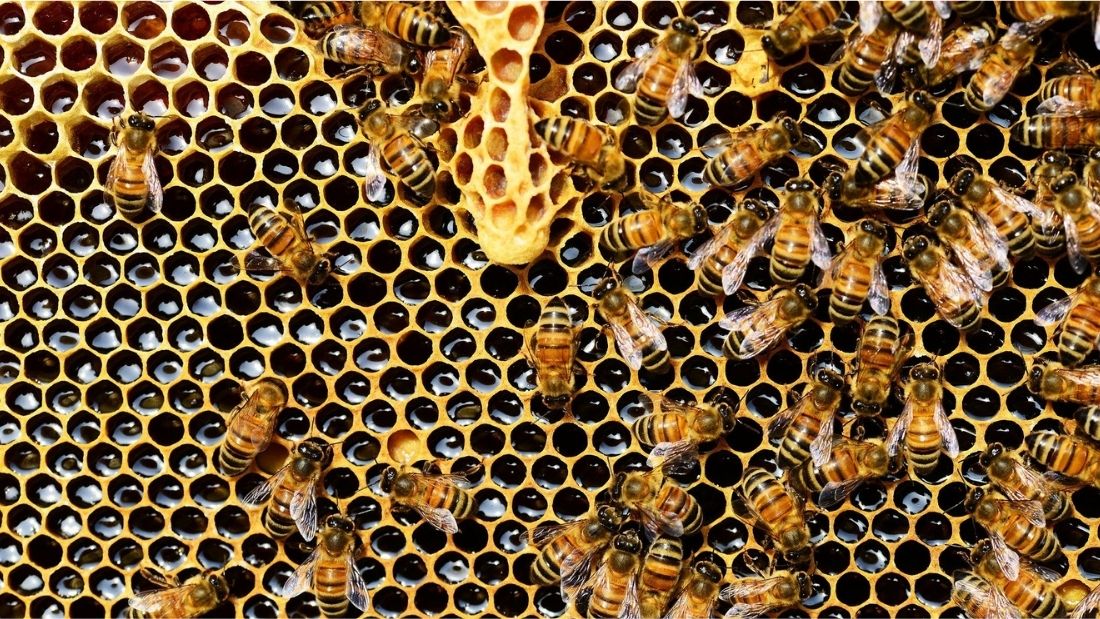 It is claimed that honey can prevent, treat and cure all manner of ailments to from acne to worms! But how much is true and how much is hype?

How is honey made?

Producing honey is hard work; a bee makes just a twelfth of a teaspoon in her lifetime. Female worker bees collect nectar from flowers, it is transferred to hive bees who ingest and regurgitate it from their ‘honey stomach’ repeatedly adding enzymes to break down the sugar (sucrose) in it into fructose and glucose. Another enzyme uses glucose to make hydrogen peroxide, which makes honey acidic. The bees ingest and regurgitate the honey until it is partially digested. So honey is actually bee vomit! It is left to dry in the honeycomb then sealed in with beeswax as a food supply for the winter. When honey is taken for humans, bees may be fed syrup made from white sugar and water – not really a fair swap!

Honey is a mixture of sugars (glucose and fructose), proteins, amino acids (the building blocks of proteins), enzymes, vitamins, minerals, antioxidants and other compounds. The contents vary greatly depending on locality and the types of flowers used. Most supermarket honey is filtered to remove pollen and/or heat-treated to keep it in liquid form and destroy pathogens. This destroys enzyme activity.

Around a third of people suffer from fructose malabsorption. Like lactose intolerance, people with this condition can’t digest that particular sugar. So, fructose is digested by gut bacteria leading to bloating, cramping, wind and diarrhoea. Eating glucose with fructose may help a bit; people may tolerate grapefruits or bananas which contain similar amounts, but not apples which contain more fructose. Honey contains more fructose than glucose and malabsorption is frequent in healthy adults and can lead to a range of tummy problems and laxative effects.

Manuka honey is produced by bees from nectar from the Manuka bush (Leptospermum scoparium) in New Zealand and Australia. It is very expensive and there is widespread evidence of a ‘honey crime wave’ of counterfeit products. UK testing reveals that one in three jars of Manuka honey ain’t what it says on the tin!

In 2002, Britain, the EU and the US banned all honey imports from China when samples of its honey were found to be contaminated with the antibiotic chloramphenicol, which can lead to life-threatening anaemia and may also be linked to cancer.

Honey is unsafe for children under one

Botulism is a life-threatening condition caused by toxins produced by Clostridium botulinum bacteria. They can form protective spores which can exist in the soil, air, dust and raw agricultural products like honey. The NHS says that you should avoid giving honey to babies less than 12 months old because of Clostridium botulinum spores.

Plants of the Ericaceae plant family (including rhododendrons) contain a neurotoxin called grayanotoxin which bees may transfer into honey via the nectar. Honey containing grayanotoxin is called Mad Honey and it is widely used in indigenous medicine to treat high blood pressure and sexual problems. Mad honey was used as a weapon of war in 67 BC, when King Mithridates’ army left chunks of ‘mad honeycomb’ in the path of the Romans, who ate it up, became disorientated and were promptly slain. Grayanotoxin was also the poison used by chief antagonist Lord Blackwood to feign his death in the 2009 film Sherlock Holmes.

Mad honey poisoning is one of the most common food intoxications among people in Turkey. Mild cases can cause dizziness, weakness, ‘pins and needles’, sweating, nausea and vomiting. Severe intoxication can lead to life-threatening heart problems. A 55-year-old woman was admitted to hospital with chest pain and was diagnosed with a heart attack after eating just three tablespoons of the honey! A 60‐year‐old man was also admitted to hospital after eating a few spoonfuls, his heartbeat slowed then stopped and he ended up having a pacemaker fitted. Most cases occur in Turkey but others have been reported worldwide as mad honey is sold online.

Can honey ease a cough?

A couple of small studies (funded by Honey Boards) suggest that honey can help ease a cough better than certain cough medicines – the methodologies of these studies have been questioned. The Cochrane Reviews (the gold standard in evidence-based health care) have found no evidence for or against the use of honey to ease a cough. They did report adverse effects of honey in children including nervousness, insomnia and hyperactivity. Honey is unsafe for children younger than one because of the risk of botulism and has the potential to cause tooth decay if it is given nightly.

Because the nerve fibres that initiate a cough and those we use to taste sweetness are located close together, honey may induce an interaction between them that suppresses a cough. All sweet substances could do this so maple syrup is a better alternative.

Honey can be used to treat colds.

Sweet substances stimulate saliva which may improve clearance in the airways and lead to a soothing effect. However, other sweet substances can do this and maple syrup would be a better alternative.

Can honey help you sleep?

This is not supported by any scientific studies. Apart from some anecdotal evidence, there is little evidence to suggest that honey can help you sleep.

It’s suggested that the small amount of local pollen in unfiltered honey can act in a similar way to a vaccine and desensitise the allergic reaction. This is nonsense and there’s no evidence to support it. The pollen in honey is mostly heavy, flower pollen that doesn’t cause hay fever. The pollen that causes it is much lighter and comes from grasses and trees that bees don’t tend to visit.

One single study suggests that a wild rainforest honey from Malaysia could help improve some aspects of memory in a group of postmenopausal women. The authors had no idea how this might work other than suggesting that honey might help improve concentration and overall well-being. A Booja-booja chocolate does that for me!

Manuka honey exhibits antimicrobial activity against Helicobacter pylori, the bug that causes stomach ulcers, in the laboratory but it doesn’t appear to be effective in people.

There is no evidence that honey offers any advantage over sugar as the provider of carbohydrate in an energy drink. Fructose (found in substantial quantities in honey) can produce deleterious effects on the cardiovascular system, increasing blood pressure and producing adverse metabolic effects such as insulin resistance. You are better off sticking to orange juice, sugar and water!

Can honey help soothe a hangover?

Just ahead of Christmas in 2010 The Royal Society of Chemistry issued a press release saying that toast with honey is the ideal way to combat a hangover. Apparently, fructose in honey (also found in golden syrup) can help the body break down alcohol into harmless by-products. However, it also reduces intoxication time, and increases blood pressure and triglycerides (fats and sugar in the blood) not good! Honey is no magic bullet – it might just be that drinking booze less is the answer.

Can honey help you lose weight?

There is no scientific evidence for this. A study comparing honey, sucrose and a high-fructose corn syrup found all three had the same effects on measures of glycaemia, lipid metabolism and inflammation. There was no difference.

Can honey reduce the risk of cancer?

There is no evidence that honey can be used to treat cancer and to suggest it can is dangerous. Sure, honey contains antioxidants but so do all fruit and vegetables which contain them in much higher quantities and don’t have the high-sugar content that honey has. High-sugar intake is linked to an increased risk for cancer, diabetes, obesity and a host of other health problems. Common sense tells us that you would be better of getting your antioxidants from red cabbage and sweet potato then large amounts of honey!!

There is some evidence that medical grade Manuka honey (standardised and irradiated to kill C. botulinum spores) can combat infection of wounds and even kill antibiotic-resistant bacteria such as MRSA. However, much of this activity is attributed to the acidic and high-sugar/low-water content (which makes it draw moisture out of the environment so it dehydrates bacteria). If you ate a bowl of sugar and vomited it up, the sugary, acidic gloop would undoubtedly have the same effect! Antibiotic resistant bacteria are a problem of our own making – the overuse of antibiotics in animal farming and the grim environment of factory farms have provided an ideal breeding ground for bacteria and viruses. Honey is not going to make these dangerous superbugs go away.

Like coconut oil, honey is presented as a cure-all functional food that can be used to treat all manner of ailments. The nutritional claims for it are not supported by scientific evidence and there is not a single claim approved under European law. Instead of searching for another animal to exploit isn’t it about time we accepted there are no magic bullets. If you want to be healthy, you have to eat healthily, exercise regularly and lead a healthy lifestyle.

This is an extract of a longer version available from Viva!Health.