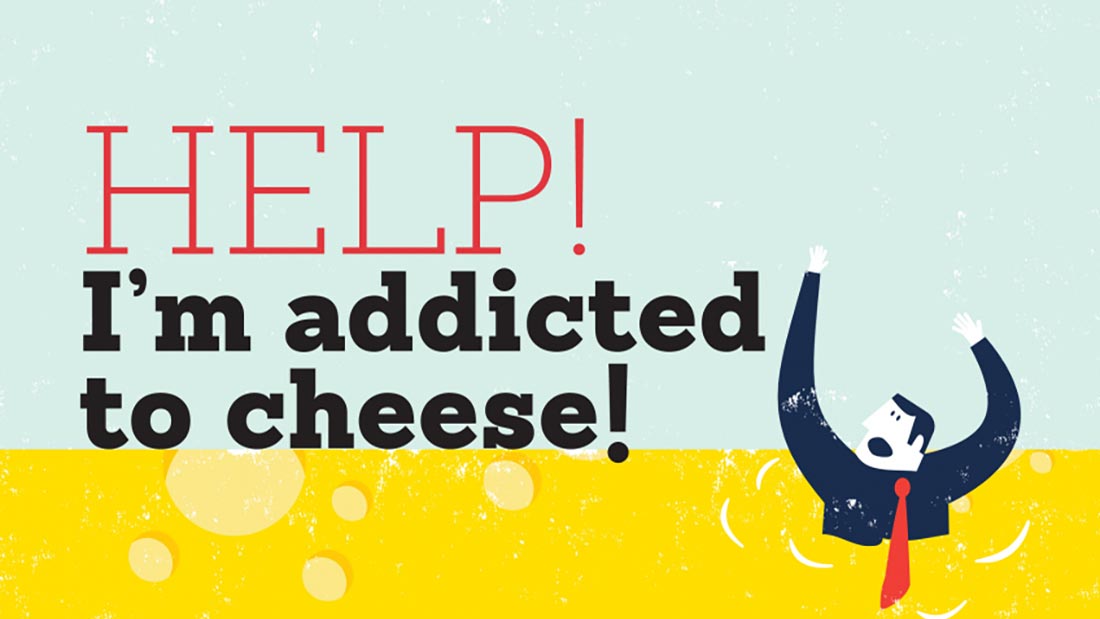 If you have ever toyed with the idea of going vegan, you most probably thought (at least once) that you might not be able to live without cheese.

I can relate – when I went vegan, my cheese cravings reached epic proportions and there were times I even daydreamed about cheese, as if it was a drug…

The truth is, cheese addiction is real and once you break free from it, the cravings stop. What makes cheese so addictive is the extremely high concentration of the milk protein casein that, when digested, results in casomorphins. And casomorphins are opioids, belonging to the same chemical family as morphine and opium, inducing euphoric feelings and lowering pain. But just as morphine and opium, casomorphins are addictive and if you suddenly stop eating cheese, you might experience uncomfortable withdrawal symptoms and strong cravings.

Why cheese and not other dairy products? It takes about ten pounds of milk to make a pound of cheese and it’s mostly water that’s lost in the process. That means cheese is very high in protein (casein) compared to other dairy products. The more casein you eat, the more casomorphins are produced and the harder it is to give it up. Cheese isn’t as strong as other opiates but science shows casomorphins can cross the intestinal wall and enter the bloodstream so eating cheese will have noticeable effects – especially if you suddenly decide to stop.

In nature, it’s only the very young offspring of mammals that drink their mother’s milk and it’s been suggested that casomorphins are a nature’s way for breast milk to have a light calming effect and aid the mother-infant bond. Opiates in general also slow down bowel movements, which can be a desirable effect in newborns prone to diarrhoea, but they almost always cause constipation in people. I’m sure many cheese lovers would agree.

Of course a huge part of our cheese cravings is also the fact that cheese is high in fat and salt, which is the magical combination that humans respond to with voracious appetite. Think crisps, chips, bacon, everything cheesy, salted nuts and fried savoury foods (basically all junk food). This is because for a long time in humankind’s history, food wasn’t always abundant, so our bodies evolved to recognise fatty foods as good energy source and developed a taste for them. Even though most of us now have more than enough food on daily basis, our bodies still crave fats and cheese is a prime example of it backfiring.

But how to get out of the vicious circle of cheese addiction? Unfortunately, all you need is willpower! If you stay away from it for a few weeks, one day you’ll realise the desperate craving’s gone. If it’s the naughty salty fat taste you’re after in the meantime, go for chips or crisps (within reason!), olives or anything with a strong flavour. You can also try adding nutritional yeast flakes to savoury dishes as they give a subtle cheesy flavour and if you fancy a pizza or pasta bake, give vegan cheese a go – grate it on top and blast at high heat. Some restaurants (Zizzi’s and The Stable nationwide, many local pizza shops) now also do pizzas with vegan cheese, don’t be afraid to ask!

Break the dairy cheese spell, once and for all. You’ll have a kinder, healthier and delicious diet as a result!

If you’re craving cheese, why not make this delicious, healthy cashew cheddar cheese?

And for other cheese-free yet cheese-based recipes such as cheesecake or quiche, see our Vegan Recipe Club ‘cheese’ pages.